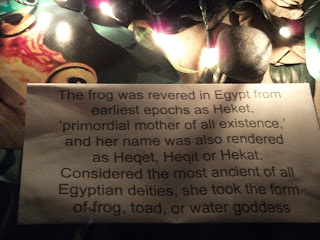 Detail from an altar at the Spiral Dance
A few years back, in the days leading up to my initiation, I was set a series of preparatory meditations and cleansing practices. One of these was to go to a local beach to cleanse and purify myself. As it was a particularly blustery day in March this turned out to be no gentle shoreline cleansing but a fierce sand-blasting by the elements. As I began the return journey, I was feeling positively scoured clean, and ready for the next stage. And then I saw them. First one, then another, then more and more. Dead frogs of all sizes, the corpses quite dried out and dessicated, were scattered along the pavement and in the gutter. Part of my mind was occupied with thoughts of the upcoming initiation, but part was bewildered. Why so many dead frogs, here, now? Had there been a plague of frogs in this small seaside village? Had they spawned and then met some grisly end? Poisoned by something? Run over? Frozen? Drowned? Can a frog drown? No one else seemed to have noticed. I walked on, puzzled.

Later, I checked on the lore and symbolism of frogs. They are creatures of earth and water (the two elements I resonate with most strongly). Due to their life cycle, from spawn to tadpole to frog, in many cultures they represent change and rebirth. Frogs seemed to be creatures I could have a connection to – and my eye was drawn back to the sentence about rebirth. In the days leading up to my initiation, a rite of passage symbolising the death of the old self and rebirth of the new, was it mere coincidence that an abundance of frogs – dead frogs – had crossed my path?


More recently, I was at my friend S’s house preparing, along with others, for the initiation of another friend. A couple of us were cleaning and tidying the space in readiness for the ritual, when we discovered the dessicated corpse of a frog under some shelves. We checked with S that it wasn’t a precious magical or ritual object (cue for many jokes about only having to ask such questions in a fellow Witch’s home!). It wasn’t – merely the hitherto undiscovered grisly relic of a hunting trip by S’s cat. Yet I noted the strange coincidence. Initiation. Dead frog, symbol of death and rebirth. Again.


My own initiation marked the onset of a period in my life where everything that could go wrong, went wrong. My health suffered, and I felt like for some reason I was out of step with the Universe. This period culminated in the end of my marriage, and a huge re-examination of my Self. And then, one evening last summer, just as I finally felt truly back in harmony with the Universe, another piece of frog magic occurred. Going out to shut the chickens away, something made me look up at the garden wall as I passed. There, at eye-level with me, was the biggest, healthiest looking frog I’ve ever seen. We regarded each other for a few seconds, until I quietly said, ‘Thank you.’ Then the frog jumped over the wall and disappeared.


I do think some part of me died and was reborn at my initiation. I think somehow, somewhere, my life had gone off-track without me even noticing. I think the Universe gave me gentle and some not-so-gentle signs and nudges to get me back on the right track. And I think the frogs - dead and alive - were part of that, a sign or message about the death and then rebirth of the self. Or at least a damn strange coincidence.


I have mentioned on this blog before now the notion of being predicted by the weather – the fact that sometimes, the weather seems to reflect our inner moods. Or are our inner moods subtly coloured by the weather without our realising it? The trouble with messages from the Universe is they can be so hard to spot in amongst ordinary day to day events. Another potential pitfall is that sometimes, we may be looking for a message when actually, there isn’t one. Sometimes a flat tyre may be telling us something profound about our journey through life. And sometimes it’s just a bloody nuisance. Sometimes, the Universe does have a message for us. But sometimes, shit just happens. The question is, when is a dead (or live) frog a message from the Universe? And when is a dead frog just a dead frog? How can we tell?

This is what I think. I think we live in an amazing and interactive Universe that speaks to us all the time. I think sometimes we hear, sometimes we don’t. Sometimes we misunderstand, or only hear what we want to. I didn't notice how out-of-tune my life had got - the Universe tried sending me gentle hints, then glaringly obvious symbolism (dead frogs) then finally had to whack me over the head with stress-related exhaustion, illness, misfortune and the end of my marriage. I can be a slow learner, but I got it in the end. How much simpler, though, if I'd been listening in the first place.


The trick is to hone our listening skills. Tune in. Listen carefully. Notice coincidence and serendipity when they occur. Use the divination methods that work for you. Ask Reya's useful question, 'If this was a dream, what would it mean?'. Trust your intuition, your gut instinct. Pay attention to your dreams. Don’t just listen for what you want – or expect – to hear. Remember to say please and thank you.


And most important of all, remember that sometimes, a dead frog is just a dead frog.

Thank you, this is very insightful & strikes a chord with me today - especially the part about listening carefully to the Universe above the din :)

So in other words - Stay Tuned!

It is the listening and interpreting that is hard sometimes.

thanks for the reminder...it's so easy for the subtleties to pass unheeded. note to self...pay attention!

I've been actively ignoring the Universe for a long time until the nudge became a shove! My life is turned on it's head, but I'm surviving and it feels good to be alive. It's also good to share in your journey and see that you have survived the process and seem to have reached a good place, so thank you for writing about your life in such a frank and honest way :D

But, This Dried Dead Frog was Left inside a Unisex bathroom. On the left hand corner. Go Figure?

AH. So is finding a dessicated frog on your threshold at a time of extreme stress a good thing or a bad thing or just a thing.
Some of the problems that were causing stress have diminished since, though none have gone away. X

AH. So is finding a dessicated frog on your threshold at a time of extreme stress a good thing or a bad thing or just a thing.
Some of the problems that were causing stress have diminished since, though none have gone away. X

How or what should I think about , following. My husband stepped on the porch at our home to smoke a cigarette. As he was standing there looking out he heard a banging dropping noise. Me and kids listening to music inside. He looks up to the roof where the location of the noise seems coming from, and steps back in fear , because something is about to fall on him. So this thing ends up beeing a dead dried out frog. While he is inspecting what just came down he also hears out of the blue casing of a crow, he looks up and it's a crow landing on the neighbors roof. Then he call me out and explains me what just happen...I was shocked because I believe in sign and symbols. We been seeing things that are kind of wired, like a bunny under hood of my car. A falcon catching a bird and ripping it in pieces under my husband's truck , thus happens right after new years
I have been seeing crows lately always one or two. I been seeing numbers 111 222 555 999 888 and so on . I know these seem like coincidences...but my feelings telling me different things. My father passed away in November. I have been having issues in my marriage, trust issues do to my husband beeing unfaithful several times. I know these are signs but I just dont know how to read the nterpretation.i am lost. Maybe somebody can help me to find closure in reading these sign given to me.

ONCE SOMEONE CHEATS IT'S A TRUE SIGHN OF ANY RELATIONSHIP FALLING APART, THKNGS COULD NEVER BE TGE SAME AGAIN.IN MY OPINION I WOULD DIVORCE THIS PERSON I FEEL THAT THERE A CURSE ON THEM FOR BEING UNFAITHFUL NOT ONCE BUT TWICE!!!

Ok so I am kind of creeped out at this moment lol. This afternoon I: "One of these was to go to a local beach to cleanse and purify myself." ✔ did that. Went to store after and when I got out of my car there was a dried up dead frog on the ground 🐸
Is it just a frog?
Or given the similarities of our day and the symbolism of it all, could it be more? Hmmm

This is completely my feeling right now. Thank you for writing this.