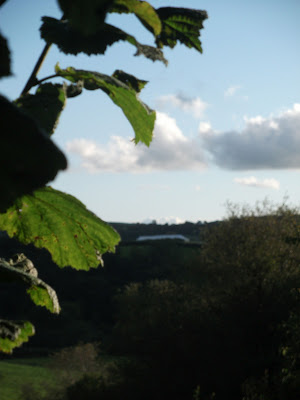 The world seems washed clean by the torrential rain of recent days. The sky is finally clear blue, and a brisk wind chases away the last vestiges of storm clouds. In the late summer sunshine, the colours of the countryside seem to sparkle.

As the chickens scratch contentedly on the lawn and clean washing on the line dances in the stiff breeze, the world seem bright and fresh and new. At the end of summer, when it might be expected to seem that things are on a downward slide to the introspection of winter, there is a sense of optimism and newness and possibility. It seems to me it ought to feel jarring, but all I feel is anticipation and happiness.

And it's not just the weather. In the last few days I have heard news of the safe delivery of a friend's first baby; not one but two engagements have been announced; happy new relationships are springing up seemingly out of nowhere. And I have received an invitation to the wedding of my beloved Goddessdaughter next summer.

Happiness and fresh starts seem to be springing up everywhere like wildflowers. Hurrah! Long may it continue!

Posted by Moonroot at 9:44 pm No comments: 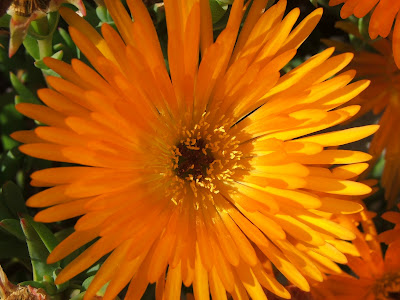 I have written before on the way scent conjures powerful m﻿emories. Today I experienced that phenomenon again. Although it's happened to me many times before, I still find it amazing.

There are many plants I don't even try to grow at Halfway Up A Hill. They are way too attractive to slugs, and believe me, the slugs and snails here are voracious. My usual gardening strategy for ornamentals is to grow the things slugs find unpalatable, so that I only have to concentrate my slug-control measures in the veggie patch. Thus my cottage garden is filled with hardy geraniums, penstemons, lady's mantle, aquilegia, foxgloves, astrantia, woody herbs and roses, and I'm quite cautious about wasting my time and money trying anything else.

But this year, a friend gifted me with some clumps of mixed seedlings that had self-seeded in her polytunnel. An eclectic mix of dill, cornflowers, tomatoes, nasturtiums, morning glories and French marigolds. I planted them with minimal protection, with a 'They'll either thrive or not' attitude. The dill was the first casualty, succumbing to the sluggy hordes almost overnight. The tomatoes were probably passed on a bit too late to produce much of a crop, but to my amazement they haven't succumbed to blight yet either, so if we're lucky enough to get an Indian summer they may come up trumps. The nasturtiums, cornflowers and morning glories are romping away. I haven't grown either of the latter two before but all three are now added to my list of slug-proof plants worth growing again. The French marigolds - which from past experience I fully expected to be razed to the ground in short order - actually seemed to be doing OK, and even when the slugs tracked them down, a brief slug-control patrol in the evening seemed to be keeping things within acceptable limits. The bright orange of their flowers looked wonderful with the brilliant scarlet nasturtiums and the glorious blues of the cornflowers and morning glories. So far so good.

Unfortunately the slugs stepped up their attack on the marigolds and today I finally had to admit defeat and pull out the last remaining marigolds after their main stems were severed overnight. I salvaged as many flowers as possible and brought them back to put in a jar of water. At least they will brighten the kitchen windowsill for a few more days.

I stripped the leaves from the stems, and the scent released by the crushed foliage brought memories flooding back. At the age of twelve I was given a small patch of ground outside my bedroom window as my first garden. At a summer fete in the village I bought a tray of French marigolds - I think they were actually the first flowers I planted there. Suddenly I was twelve again, digging over the soil in that small patch, earthy hands carefully tending the marigolds, a chamomile plant, some mint, and the 'Wargraves Pink' hardy geranium, bought at the same village fete and from which I still have a cutting to this day growing against the wall of the workshop.

I hadn't thought of that garden for a very long time, but the smell of marigold leaves brought it all back so clearly. How amazing that our senses can do this for us. Our bodies and brains are such wonderful things!

P.S. I know the photo isn't actually a French marigold, it was the closest I could find!

Things have been a little quiet on here of late. My computer crashed spectacularly and for several weeks with fingers crossed I waited to see if it could be resuscitated - and whether or not I had lost all the precious photos and documents I had been meaning to back up and not got around to...

Well, the computer is duly back from the dead and I am eternally grateful to Stuart for not only reviving it but also restoring all my files. Phew!

I have been itching to get blogging again and have lots of posts waiting to be written. There is a lot of lost time to be made up for...