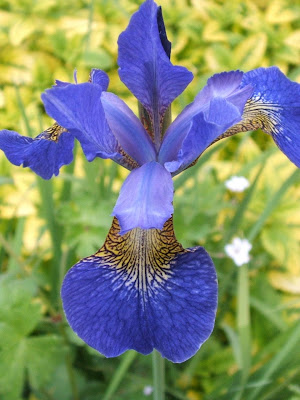 I fall in love with the world again every May. It is such a beautiful month.

The trees are all in leaf by now, but the leaves are still tender, so green, almost translucent. The woods and hedgerows are full of bluebells, probably the most beautiful blue in the world. And they are complimented and highlighted by the other wildflowers accompanying them: red campion, buttercups, Queen Anne's lace, stitchwort, lady's smock. And the lushness of the grass!

The skies are blue and full of sun which shimmers on the fields of buttercups. The sweet, faery scent of hawthorn entices from every hedgerow. The joyous chatter of swallows and martens, the rich fluid song of blackbird and thrush. Apple blossoms flutter in the breeze, and the bees drink deeply from their abundance.

In the garden the vegetables seem to grow with each passing day, and in the flower borders welsh poppies, irises, forget-me-nots and columbines harmonise tones of yellow, purple, lilac and blue.

The world is in love with life at this time of year, its beauty heart-stopping. Oh yes, I love May. How could I not?

The Mysterious Case of the Vanishing Hen 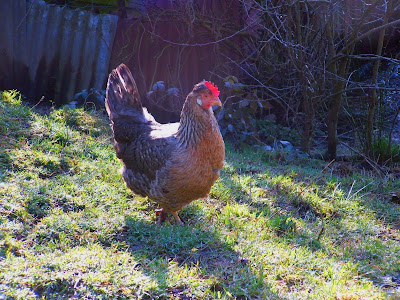 As this afternoon was another gloriously sunny affair, IB and I decided to work in the vegetable patch. And while we worked, we opened the door to the chicken run, so they could come out and graze on the lush grass by the greenhouse. We assumed that as we were working close by they would be safe from foxes and buzzards.

One of the younger Light Sussex hens (Blossom) was showing signs of broodiness, so we evicted her from the nest box (much to her disgust) and shut the pop-hole so she couldn't sneak back in when we weren't looking. The delights of scratching up interesting tit-bits in the grass soon distracted her, and soon everyone was out enjoying the fresh air and warm sunshine - including us in the veggie patch.

After a few hours, we decided it was time to retire for a cup of tea, and ushered most of the chickens back into the run. I brought down some wheat to coax in the stragglers while IB took the gardening tools back up the hill and put the kettle on.

As soon as I opened the pop-hole, Blossom shot back into the nest box, her hormones clearly overwhelming her appetite! The other hens had no such qualms and clustered around my feet, murmuring contentedly and eagerly pecking up the grain. I did a quick head count, and could make out only eight hens around me. Blossom was in the nest box, but that should have left nine. I counted again. Still only eight. Who was missing? The two Black Rocks, Ceridwen and Blodeuwedd, and Rhiannon the Speckledy, present. Three of the Light Sussex: Daisy, Dot and old Blodwen, too. The two new smokey-grey Bluebells so new they are not yet named, and Blossom (the fourth Light Sussex) looking puffed up and sulky in the nest box, all there. Except for one. Bella, the Cream Legbar.

Bella is one of my oldest hens, yet she still lays 2-3 eggs a week. They are the most beautiful pale blue colour, and very popular with my regular egg customers, some of whom claim they taste better than normal eggs (I'm not convinced of this myself, but still...). Bella's also very flighty, panicking at the drop of a hat and seemingly convinced I am actually an evil fiend who will do her in the very second she lets her guard down.

I double checked the run, under the leaning elder, under the chicken house (where they often enjoy a dust bath). I called, and shook the container of grain, which is usually guaranteed to bring all the hens running eagerly to me. No sign of Bella. I began to worry. IB joined me, and we searched in the trees overhead (in case she'd had a Bella-style freak out about something and flown up to an overhanging branch), and the undergrowth - at first close to the area the hens had been in, and then further and further afield. Still nothing.

I racked my brains to try and remember if I'd heard something strange while we'd been in the veggie patch, but couldn't remember anything unusual. We searched and called and began to suspect the worst, except the other hens didn't seem spooked, and there were no tell-tale heaps of feathers to be found.

Meeting back at the greenhouse, we were baffled. Our best guess was that she'd wandered away from the rest of the flock and been snagged by a lucky passing fox. But the lack of feathery evidence seemed strange.

"Perhaps she's lurking in the undergrowth somewhere, and she'll come out later," I suggested, thinking aloud. "We'd better check back frequently in case she turns up. Or perhaps she's crept off to find somewhere to lay as the hen house was shut. Perhaps she's round the back of the greenhouse..."

IB climbed onto the wall of a disused cold-frame to peer behind the greenhouse - and as he did so, Bella shot out of the cold-frame in a flurry of feathery panic! Closer inspection revealed that she'd fashioned herself a cosy hollow in there, where a perfect new-laid pale-blue egg now nestled. Her mottled brown plumage was perfect camouflage, and we'd walked right past her during our search without seeing her at all.

Bella is now safely back with the rest of the flock, and I think everyone's heart rate is just about back to normal again now! 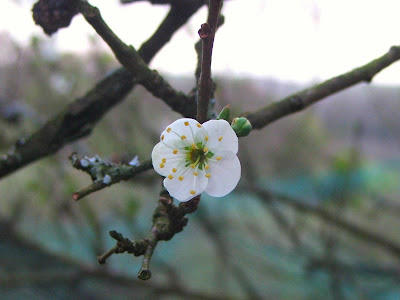 I love the Native American way of naming the moons of the year for their character, for example 'Snow Falls Moon', 'Leaf Moon' or 'Frogs Croak Moon'.


I have oftened flirted with the idea of coming up with a year's worth of Moon-names myself, although I haven't done it so far. Yet I'm sure if I was to name the May moon it would have to be 'Blossom Moon'.


It has been such a dry, cold, spring here that everything in the garden and hedgerows has been held back - snowdrops, daffodils and bluebells several weeks later than their usual time of appearance. And yet when things have appeared, they seem to have put on a much more spectacular display than usual. Perhaps they're making up for lost time, or perhaps we're just so glad to finally see them, they seem much more impressive than usual. And this year the blossom seemed to come all at once, in a joyous froth of petals heralding summer with heedless abandon.
Just look at the photos I took a couple of weeks ago: 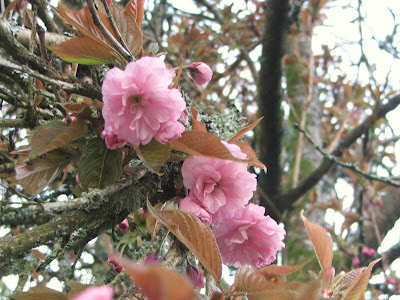 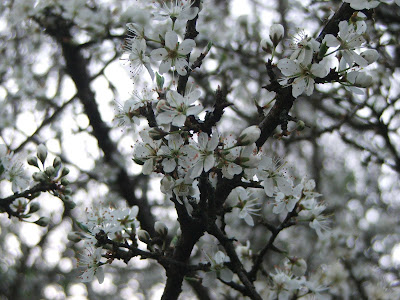 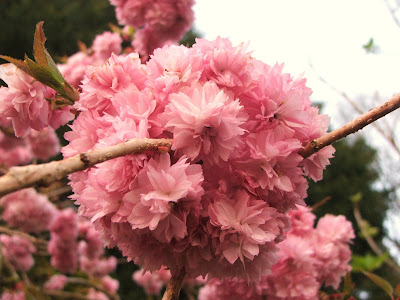 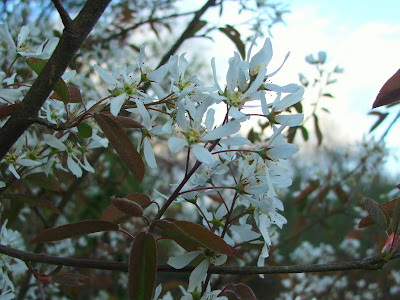 Then it was flowering cherry, juneberry, damson and blackthorn. Now, in the orchard there is pear and apple blossom, cherry, crabapple and very soon, quince. And from every hedgerow the breeze carries the sweet, uncanny fairy fragrance of mayblossom (hawthorn). 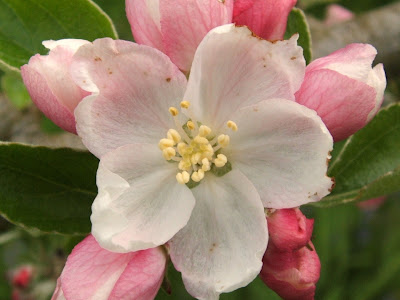 I'm sure the bees and the fairies must be as happy as I am to see such abundant beauty.
Posted by Moonroot at 10:44 pm No comments: