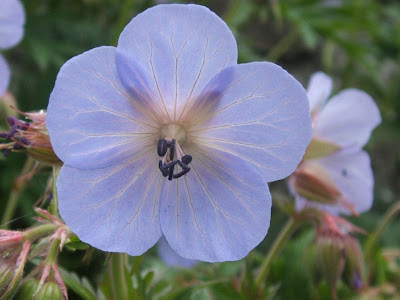 I have been extremely busy of late, as my lack of posts will testify. In the absence of a proper full-time job I have been taking on work as a domestic cleaner/gardener/odd job woman, and the last couple of weeks have been hectic as on top of my 'regulars' I have picked up a lot of one-off jobs as people want their homes spring cleaned or their gardens spruced up for the summer. I also continue to make and sell crafts, and last week every spare moment that I wasn't scrubbing bathrooms or trimming hedges I was frantically finishing off craft projects ready for the local Spring Fayre at which I had taken a stall, hoping to make a bit of extra cash.

By Saturday morning I was tired but well prepared, with everything neatly wrapped in newspaper and packed into boxes. As well as lots of hand-decorated candle jars, I had some pretty painted birdboxes, lacy-knit mohair shawls and I had planted up violas and busy lizzies into some old vintage tea cups that had lost their saucers and were about to be chucked by one of my house-cleaning clients until I rescued them. I was pretty pleased with my efforts and had high hopes things would sell well.

IB had kindly offered to come along and help me and we arrived in good time and set up the stall, which I was pleased to see faced the entrance so that my goodies would be the first thing people saw on entering. A very kind gentleman went back to his nearby home to get a few coathangers for me so that I could display my shawls to their best advantage.

Once the stall was prepared, I took a walk around to check out the other stalls, and chatted with my friend Jen and another friend I hadn't seen for a while. I bought a pretty hand-made birthday card for an upcoming birthday, a beautiful hardy geranium at a bargain price, and some tombola tickets (which unfortunately didn't win anything!). Then just before the doors opened to the public I grabbed us two cups of coffee from the friendly lady who was selling refreshments.

The first person to walk in was one of my neighbours, and we had a lovely chat catching up on the neighbourhood gossip. She was catching the bus home, so when she bought a large scented geranium plant I offered to mind it for her and drop it off when IB & I drove past her house on the way home later. My Mum and Dad also dropped by with a friend and were very pleased with some bargain tomato plants they snapped up - and I was pleased when their friend was my first customer, buying one of my candle jars as a gift for her daughter.

So far people were admiring my goodies but I had only made the one sale. Even so, I had been eyeing up the home made cakes and preserves on the next stall, so soon spent some of my earnings on a jar of marmalade and a yummy-looking lemon drizzle cake. The rest went on some vegetable plants from another neighbouring stall!

People were still coming in thick and fast and I was enjoying chatting with friends from the village that I hadn't seen for a while. One stall was selling locally made cheeses at bargain prices and the tasting samples were proving very popular! Once IB and I had tasted too, we realised why and of course had to buy some of the cheese. I also bagged a bargain photo frame which I spied across the hall on the bring and buy stall.

After the initial rush of people, it quietened down, although people were still coming and going. We had another cup of coffee and a cupcake, and chatted with the other stall holders. Once things had really quietened down, the lady running the tombola was keen to finish up, and went around the hall giving tickets away to anyone who wanted one, just to clear the remaining prizes. We won a bottle of bitter lemon and a very nice gift set of M&S toiletries - but not the bottle of whisky that IB had his eye on, which was eventually won by the vicar's 6 year old daughter (her Daddy took immediate custody of it)!

In the end, I sold only one other candle jar, which meant with all my purchases overall I was well out of pocket (despite not having to pay for the stall).

My hopes to sell plenty of things and make some money had been dashed. But then again, was it so bad? I spent an enjoyable day with IB, chatting with friends and meeting some lovely new people. I came away with some real bargains and treats - plants, gourmet cheese, marmalade and cake - and once again felt myself connected to my local community. So - not what I had expected, but perhaps what I needed.

Sometimes, we are so focussed on the daily bread and butter of making a living, we miss the jam - the quality time we spend with friends and family. We overlook the small pleasures of life like a beautiful flowering geranium or some tangy home-made marmalade. And we take for granted the immeasurable wealth of being part of a community.

Though I worry from day to day about my lack of income, today I am reminding myself that bread isn't everything. Without a little jam, it's pretty boring really.
Posted by Moonroot at 3:31 pm 6 comments: 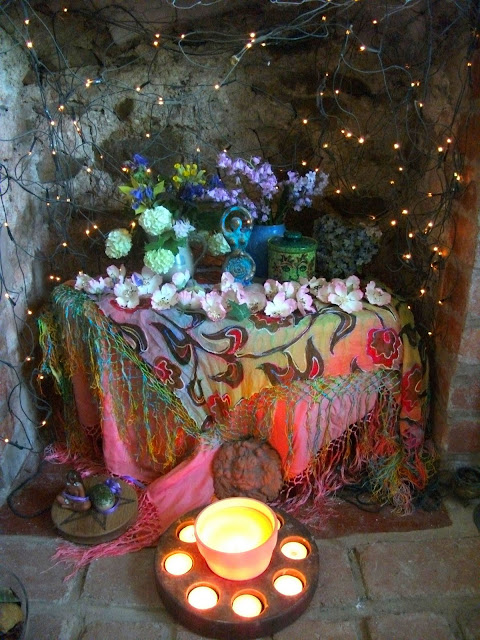 Beltane Blessings to one and all!
Posted by Moonroot at 3:19 pm 4 comments: