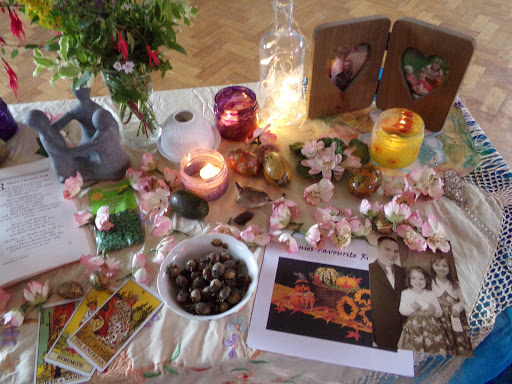 I love a good altar, don't you? Over the years I have made and worked with many altars (some of which may be seen here), both in my home and garden and for rituals, gatherings, workshops and classes in a variety of places. I've made altars alone, and collaboratively with others, and I have appreciated the beauty and artistry of the altars built by others. Altars are a wonderful visual focal point for a specific purpose such as a ritual, or to honour a deity or your ancestors. I also like to have a permanent, 'general-purpose' altar on which I keep things like my magical tools and representations of deities and totems. Even if I don't work with an altar every day, I like the way its presence in my environment keeps a focus on my beliefs.

However, sad to say over the last couple of years altars haven't been much of a presence in my home. It's been primarily for practical reasons - we are now a five-cat household, and any Pagan who has ever had a cat will be able to tell you that cats (especially young, curious, playful cats) and altars are not a good mix. Of late, my altars have tended to be simple and temporary, mostly consisting of some seasonal flowers in a vase, a candle and maybe a small deity image.

In a fit of misguided optimism I recently decided to make an altar on the top shelf of a tall bookcase. I'm in the process of writing a book, and decided to make an altar to honour the creative process. I cleared the shelf and assembled images of creativity, growth and inspiration. The centrepiece of the altar was a Rose of Jericho in a dish of water. If you're not familiar with  this plant, it is a desert plant which dries, browns and shrivels up in times of drought but then miraculously unfolds and becomes green again when it is put in water. It felt like an appropriate symbol of growth for the project. 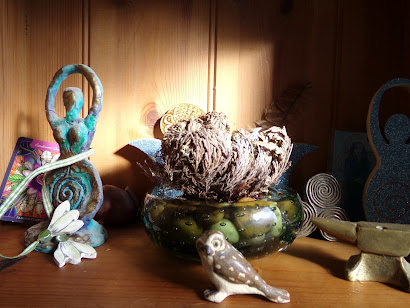 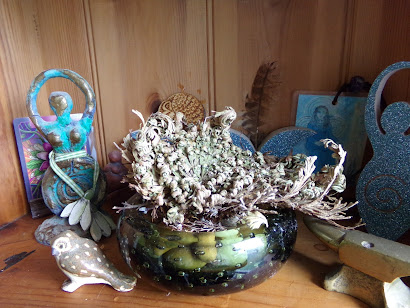 The top shelf of the bookcase seemed like a suitably safe, inaccessible place. Or it did until last night, when our tortoiseshell cat Nutmeg decided to jump up onto the top of the bookcase, rocking the whole thing and sending the Rose of Jericho and its bowl crashing to the floor. Miraculously, the bowl was unbroken and the Rose of Jericho merely lost a few fronds - thank goodness, I would have worried about the symbolic implications for the project if they'd been destroyed! Even so, it seems I need to reconsider my options, altar-wise.

Today I have been thinking about where and how I can make a cat-proof altar. The classic table-top altar is fine if you don't have pets or small children to worry about, but if even a high-up shelf isn't safe enough it's necessary to think outside the box. I'm wondering about the possibilities of a vertical altar on a wall surface? I could perhaps start by painting a background and then decorate it with collaged images. 3-D visual interest could be provided by adding a candle sconce or two, and perhaps a small corbel to accommodate a Goddess statue. There are plenty of Green Man and other Pagan-themed plaques available too, and wall-mounted vases which could hold seasonal flowers, greenery, or even found objects like feathers. Decorative pegs and clips could display tarot cards or artwork. And some artfully arranged fairy lights would be a great finishing touch. Am I on to something? Time will tell. I will definitely post pictures of whatever I come up with.