Confessions of a Fairy Goddessmother 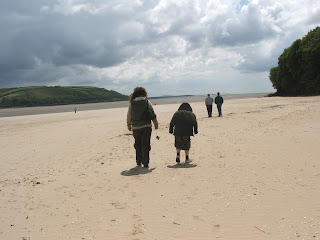 One thing I always knew I wanted was to have children. Unfortunately, my body had other ideas and it wasn't to be. After 16 years of trying for a baby and now aged 44, barring a miracle it seems pretty unlikely that I will ever actually become a biological mother.
For many years my unfulfilled broodiness left me frustrated and depressed. Every menstruation brought a sense of failure and disappointment. I had my eyes so firmly set on the thing I wanted - a successful pregnancy - that it never occurred to me that there could be another outlet for my maternal instincts. Life, however, has a way of presenting new possibilities if you are only open to them.
I can't pinpoint exactly when my perspective changed - there wasn't a light bulb moment as such - but at some stage in the last 16 years, my childlessness became less of a source of pain to me. That fact is almost certainly due to our beloved friends, Kevin and Ann, who have generously allowed us to form a close bond with their three wonderful children. We have been around, babysitting and doing the aunt & uncle thing since their first daughter, Rachel, was born. When their second daughter, Charlotte, was a toddler, I had given up my stressful job (in an attempt to increase my chances of getting pregnant), so I spent a lot of time looking after her while Ann was at work. And then I did the same with their son, Michael.

We became extended family and spent virtually all our spare time together. I started using the term 'heart family' to describe our relationship to each other. We have watched with awe, pride, joy - and at times anxiety! - as Rachel, Charlotte & Michael have grown into amazing individuals. We have shared in the tears, the laughter, the scraped knees, the food fads, the treasure hunts, the birthday parties, the bad dreams, the endless questions (why?), the hilarity of water fights, the magic of Christmas, the walks to the park, the bedtime stories, the games of hide and seek, and of late, the teenage hormones, exam jitters, first romances, and initial steps into independence and adulthood.

Through all this we have been in the unique and privileged position of part-parent, part-friend, part-confidante... but it has been hard to define our relationship to the children using existing terminology. We aren't blood relations, so we aren't really an aunt and uncle. Kevin & Ann have asked us to be listed in their will as guardians of the children, in the event that something should happen to the two of them. But unless that should happen - and I pray that it won't - we aren't the children's guardians. We aren't Godparents, as we aren't Christians and have never been asked to fulfill that role. And yet we do and don't meet some of the criteria for each of the above categories. As there really doesn't seem to be a widely-used term for the nature of our relationship, I have started to describe myself as their Goddessmother. It kind of fits and I like it.

Although we now live miles apart, Rachel is currently at university nearby, and this weekend Ann brought her back to Wales to start her second year at Uni. It was so lovely to spend the weekend together, and we effortlessly slipped back into the easy friendship between us, even though we don't see each other so often these days.
Somehow, despite my inability to bear a child, I've been lucky enough to find a way to express my maternal instincts. I'm blessed to share in the lives of three wonderful young people, and I hope I can be there for them whenever they need me. Life has a way of presenting new possibilities indeed. I'm just glad I looked up from the path I was on long enough to notice. And I'm so lucky to have friends generous enough to open up those possibilities in the first place. 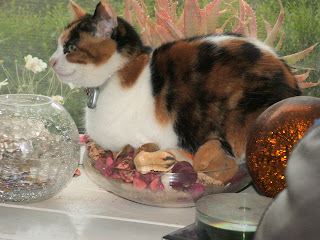 It's a grey and blustery Sunday in September, with the threat of rain in the air. So what should you do?
Snuggle up in a too-small bowl of pot pourri.
Of course. Silly me.
Posted by Moonroot at 12:06 pm 8 comments:

Email ThisBlogThis!Share to TwitterShare to FacebookShare to Pinterest
Labels: Cats 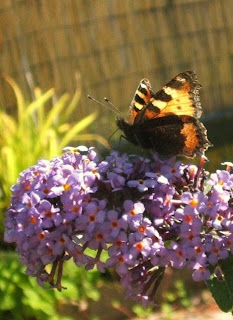 I am very excited to see that the details of Avalon Spring are now available to view on line. I'm really excited to be involved with this new event, and I'm so looking forward to it. Go on, click on the link!
Posted by Moonroot at 6:31 pm 9 comments: 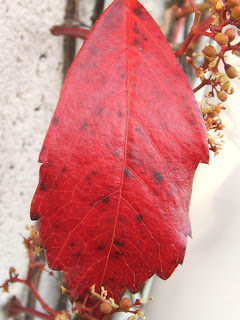 Flowers and butterflies still grace the garden. There is grass to be cut and tomatoes are ripening on the vines. Yet long, light summer evenings dwindle as days shorten.
Last call for summer dresses, sandals and cool cotton tops! Soak up every ray of sunshine while the warmth lasts. Time for one final barbecue?
Bramble-scratched arms, berry stained tongue. Mist in the valley on dew-soaked mornings. Swallows discuss departing for warmer climes. Apples, blackberries, elderberries, quince. Leaves redden yet cling on - for now.
In the kitchen: pickles and jellies, jams and relishes, chutneys and syrups and fruit pies. The harvest is being gathered and stored for the cold months ahead.
Neither still summer nor yet totally autumn. We balance on the cusp.
Posted by Moonroot at 10:05 pm 7 comments: