This morning, as I prepared to leave for work, I discovered my purse was missing. It's such a horrible feeling of cold shock as you realise, yes, it's definitely gone. Even worse, there had been £100 cash in it, wages not yet paid into the bank.

After combing the house and car, I rang the last place I knew I'd had it: a shop visited yesterday. To my huge relief, it had been handed in, so I drove over to collect it. From the conversation with the shopkeeper, I wasn't clear if anything was missing and to be honest I fully expected the cash to be gone. I was just hoping my debit and credit cards and drivers license were still there, anticipating what a huge pain it would be to have to cancel them all and arrange new ones.

To my utter amazement and genuine delight, not a thing was missing from the purse. Not so much as a penny, so far as I can see. What a wonderful affirmation that there are kind, lovely, honest people in the world - especially after the horrors in the news lately.

This little episode is a welcome reminder that there are far more good people in the world than bad. Even in these difficult, cash-strapped times, people don't take advantage of each others' misfortune. They want to help, they want to treat others as they would like to be treated themselves. Yesterday on Facebook, in the wake of the Boston bombings I saw this lovely quote: "When I was a boy and I would see scary things in the news, my mother would say to me, "Look for the helpers. You will always find people who are helping.” - Fred Rogers. What a great reminder that as a species, although we are capable of great evil and great cruelty, we are also capable of selflessness, generosity, compassion and all manner of good things. Today I am choosing to remember that "You will always find people who are helping". Another small miracle.
Posted by Moonroot at 12:38 pm No comments:

Email ThisBlogThis!Share to TwitterShare to FacebookShare to Pinterest
Labels: gratitude 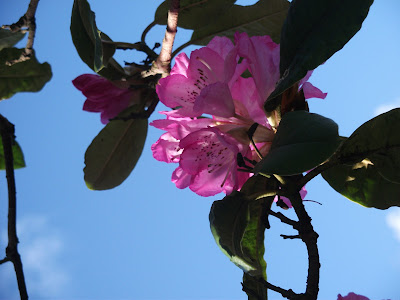 ﻿
Winter seemed determined to hang on this year. Although the weather for the last month or more was bright and sunny for the most part, it stayed bitingly cold and dry. The combination of bitter daytime cold, harsh overnight frosts and lack of moisture left the fields brown, the trees and hedges starkly bare and a lack of flowers in the hedgerows. Only some brave snowdrops showed their faces, but even they were late arriving and are still blooming into April, when  normally they'd be long gone. A few primroses in sheltered spots, and daffodils of course, but all much later than usual.

At least here in West Wales we escaped the heavy snowfalls that plagued other parts of the UK, but it started to seem like the White Witch of Narnia had cast a spell over the country.

At last the wind direction has changed, bringing both milder air and rainfall. And almost overnight the countryside has changed. The fields have turned from brown to green. The hedges and woods are also starting to green up as the leaves return. Lawns are suddenly starred with daisies. Bumble bees have emerged. In gardens, rhododendrons, magnolias and flowering cherries have burst into life from a standing start. The cowslips in the meadow that had barely raised their heads last week are now covered in their clustered yellow bells. What I took for a bank full of snowdrops as I drove over to a friend's house the other day was instead a swathe of wood anemones that had seemingly sprung up from nowhere. And yesterday I spied my first pair of swallows.

I suspect that you could almost see the landscape change on an hourly basis.

How marvellous the land is! How resilient and adaptable. How lucky we are to live in such a miraculous place.