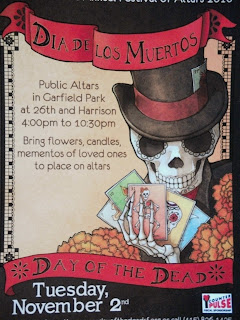 Our final day in San Francisco was La Dia de los Muertos, the Day of the Dead (2nd November). In the UK, it is 'All Souls Day' and passes by pretty much unnoticed, but in Mexico and amongst some Mexican Americans in the US it is the occasion for a big celebration.
In San Francisco, in the Mexican Mission district of the city, the weeks leading up to the date see shops and houses decorated with altars to the dead, intricately-cut tissue paper bunting depicting skulls, skeletons, flowers etc., and decorated sugar skulls and 'pain de muertos' or 'bread of the dead' are for sale in bakeries. Marigolds are another traditional decoration at this time of year, and along with all the Hallowe'en pumpkins, witches, ghosts, etc, the Dead are a definite presence within the city. 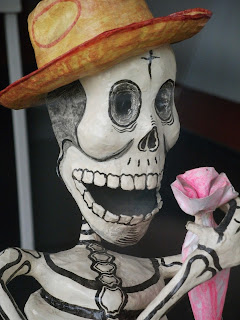 The Day of the Dead skeletons are usually depicted dressed in clothes and/or carrying the tools of their trade. Traditional ones would be dressed as farm workers for example, or fancily-decked out Victorian ladies, but I also saw more modern ones such as the skeleton dressed as a career woman with power-dressing suit and briefcase, or a skateboarding skeleton complete with backwards-facing baseball cap. The point is that the Dead are like us - they are us, and we shouldn't be afraid of them, or of death, nor should we take life too seriously. I must say I like the idea of continuing a relationship with our Beloved Dead after they have left us, and in many ways the Day of the Dead celebrations are like a big party to which the ancestors and the living are both invited to hang out with each other.
There is a big parade through the streets of the Mission District on the evening of la Dia de los Muertos, so that evening, IB, Deborah and I and several of her friends painted our faces to look like skulls, and carrying a lit votive candle each, made our way to the gathering point for the parade.
There were already many people assembled, and some of the costumes were amazing, putting my own skull-bedecked T-shirt and jeans ensemble to shame. As well as all the people dressed as the dead like us, there were drummers, Aztec dancers, stiltwalkers and an amazing covered wagon pulled by a team of cyclists, with a kind of 'ringmaster' figure perched on top calling through a megaphone for people to 'bring out your dead!'. 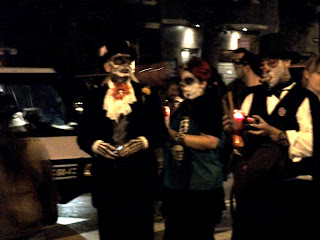 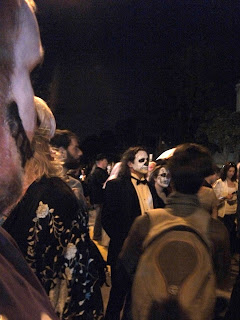 We followed the parade from its start on Bryant Street, turned onto 24th Street (which was thronging with onlookers) and followed it for several blocks before leaving the crowds and cutting down Balmy Alley to the quieter part of the celebrations, where beautiful altars to the Dead had been set out in Garfield Park. 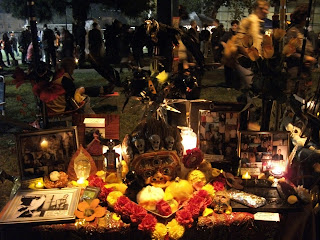 The park was a mixture of people, some in 'Dead' costumes, others conventionally dressed, wandering thoughtfully amongst the altars. Yet at the same time, in a nearby part of the park a brightly-floodlit kid's baseball game was taking place complete with picnicking families. It was, for me, the perfect juxtaposition of the living and the dead; a reminder that life and death are inextricably linked. The dead are always with us. And life goes on. 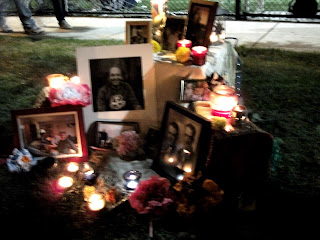 P.S. Beautiful photos of some of the costumes and altars may be found here.
Posted by Moonroot at 1:54 pm

What a fabulous adventure you've had! Isn't it nice to be able to go back in your mind and sort of re-live it?

I find other cultures so fascinating.

All Souls Day is what became our All Hallows Eve or Hallow e'en. It's our day of the dead. It meant a lot to me after my mother died and I missed her. Her culture, the Kodavas of South India also remember the dead and respect their ancestors so it has added meaning for me.

I think the Day of the Dead reminds us how we are all linked in our cultures. The expression of it may be different but lots of cultures have something similar.

Mortuis Libamur!...Let us drink to the Dead!