Valentines Day, Past and Present 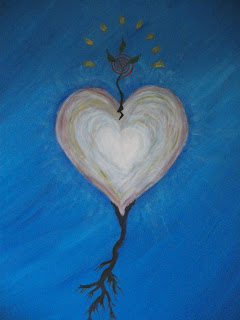 How times change. Three years ago today, I wrote on the blog about how T had proposed to me 17 years earlier. I remember showing him the post, expecting him to be pleased, touched by it. His reaction was to say gruffly that it was nice - I thought perhaps I had embarrassed him. With the benefit of hindsight I now see his taciturn response was actually guilt. While I was writing nice things about him on my blog, he was secretly conducting an affair. Even so, I received a Valentine card and flowers from him as usual.

Last year I didn't post anything about Valentine's Day. I was struggling with a difficult job, awful weather, and a debilitating chest infection. Yet Valentine's Day had become a source of pleasure, not pain. I received a card, chocolates, flowers. But this time from IB.

I have sometimes shied away from writing too much about IB on the blog. There is a part of me that feels guilty that I have found happiness and love again, so quickly. I never expected to. I worry that others will judge me for moving on so quickly, or believe that this is merely the infamous 'rebound'. I have worried about this myself. And yet... nearly two years since we started seeing each other we are still together. Sometimes he drives me crazy (sometimes I drive him crazy!), yet he can always make me laugh. He is always ready to talk things out, so that our understanding of each other grows and our love deepens. He is hard working, patient, kind, funny, caring. He is affectionate and loving. He understands me. Somehow we just fit together in a way I have never fitted with anyone else.

Today I received a beautiful card. Today we worked together in the greenhouse, clearing it out and cleaning the panes to let the light shine in, planting some early crops. This evening he cooked me a delicious dinner and now we snuggle together on the sofa. Things have changed so much over the last few years. But now, at last, I can relax. I know I am in the right place, with the right person. Perhaps this is where I was meant to be all along.
Posted by Moonroot at 9:37 pm 7 comments:

Just a few things that have caught my eye of late... 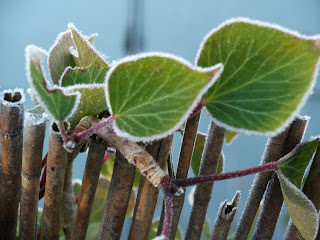 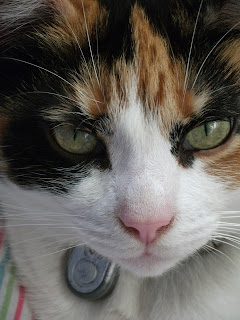 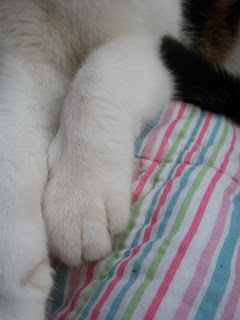 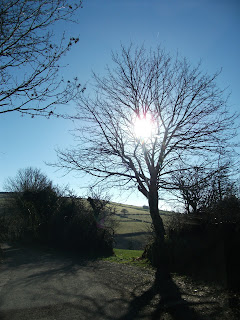 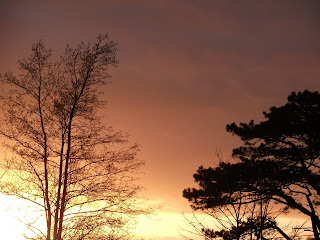 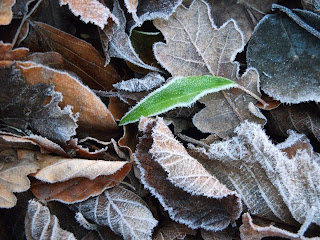 I Love My Blog! 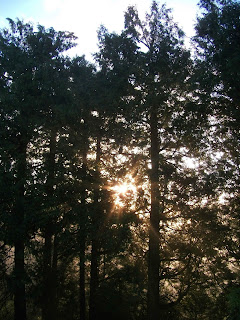 Today is the anniversary of my very first blog post on 'Moonroot', back in February 2007. I had set up the blog and then found I hadn't a clue what to write about. So in time-honoured fashion, I chatted about the weather! I began just writing about my daily life, and gradually found my voice. It was so heartening to find that people were leaving comments and enjoying the blog.

I myself was greatly enjoying it. I had always kept journals, albeit somewhat patchily. Sometimes I would even buy a beautiful new journal but not write in it, anxious about despoiling the clean new pages, waiting to start 'until I had something worthwhile to say'. Since starting my blog, I still keep hand-written journals, but something about the process of blogging has freed up my journalling. I no longer worry about having to write an entry every day, I write when I want to. And somehow I want to write more. I don't worry about the state of my handwriting, or the crossings out or smudges, or even the tear stains that occasionally mark the pages. This is journalling as it should be, life on paper.

Blogging has also encouraged me in other directions. Buoyed up by the kind comments others have left here I have taken a couple of writing courses, which have been both fun and educational. I have also become enthused by digital photography - having started taking photos merely to illustrate the blog and make it more interesting I now carry a camera with me everywhere, snapping away whenever I find inspiration, and learning by trial and error what works and what doesn't!

I have also 'met' lots of lovely people via the blog and found great joy in reading their blogs in turn. There is such a flowering of creative talent in the blogosphere! And these same people have been so kind and supportive to me in times of difficulty - most notably, of course, during my recent divorce. Thank you all so much. You have no idea how much you helped me in those dark days.

Sometimes people ask me why I blog and it is hard to come up with a short answer. But for all the reasons listed above, I love my blog. And I suppose above all, that is why I keep blogging! 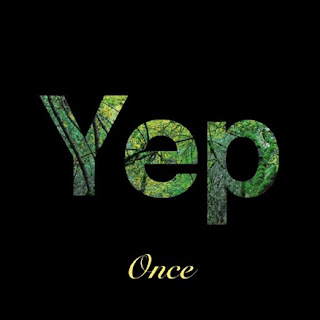 And just a quick recommendation for my friend Al Chan's latest project. He has teamed up with Mark Caputo as 'Yep' and their debut album 'Once' is released today. You can read all about it, listen to some tracks and download it from here.

Al was kind enough to play us a few sneak preview tracks when we were over in San Francisco. I loved it, and I hope lots of other people will too!
Posted by Moonroot at 9:20 am No comments:

Email ThisBlogThis!Share to TwitterShare to FacebookShare to Pinterest
Labels: friends, music, The Rubinoos

Here is my offering for this year's Poetry Festival in honour of Brigid. 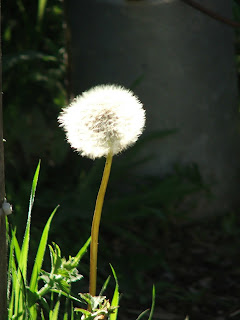 To all that is brief and fragile
superficial, unstable,
To all that
lacks foundation

argument or principles;
To all that is light,
fleeting, changing, finite
To smoke spirals,
wand roses,
To sea foam
and mists of oblivion...
To all that is light in weight
for itinerants
on this transient earth
Somber, raving,
with transitory words
and vaporous bubbly wines
I toast
in breakable glasses.

~Maria Eugenia Baz Ferreira
﻿
Posted by Moonroot at 8:54 am 1 comment: