Celebrating Lammas During the Pandemic 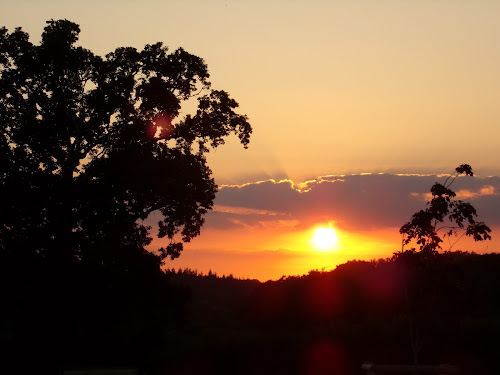 Although restrictions have eased since I wrote about celebrating Beltane and Summer Solstice in lockdown - and most places in the UK are not actually in lockdown any more - the ongoing pandemic means full scale gatherings for  Lammas rituals and celebrations aren't possible. Up to date guidelines for your area may be found on this Government website - please check and ensure you are adhering to the rules.
Nevertheless, as with the previous two festivals with a bit of imagination it's possible to celebrate Lammas in memorable style. As before I have suggestions for a variety of situations - even though many of us are now able to resume a kind of normality in our lives, there are still people who need to protect themselves by shielding, so there are suggestions for those who are able to get out and those who are not.
Ideas for celebrating Lammas in the countryside or at the beach/park
Ideas for celebrating in your garden 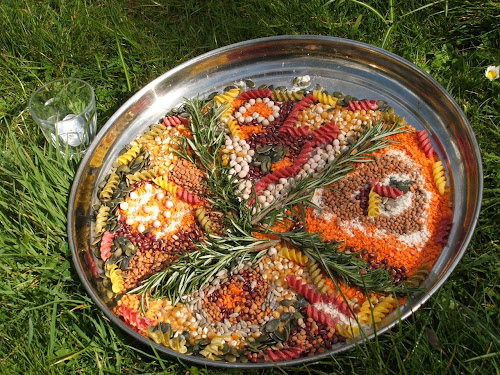 Ideas for celebrating in your home
May we all have a sweet and blessed Lammas, and may your harvest be bountiful. Blessed be.
Posted by Moonroot at 1:34 pm 1 comment: 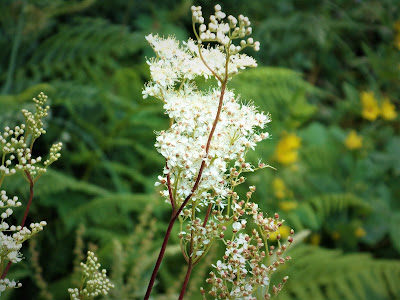 At the height of summer, two wonderful healing herbs are blooming spectacularly in the hedgerows and meadows around Halfway Up A Hill. I plan to pick and dry plenty of both to take us through the coming months.

The first is Meadowsweet, whose froth of sweetly fragranced flowers never fail to delight me when they begin to appear. Meadowsweet has such a soft, gracious gentleness, yet it is balanced by an enduring inner strength, a calm serenity. If Meadowsweet was in human form, she would be exactly the person you would want around in a crisis. She'd mop up the mess, fix, calm, soothe, hold your hand, make you a cup of tea and pop a casserole in the oven before quietly slipping out the back door without any fuss.

Meadowsweet contains salicylic acid, one of the active ingredients in aspirin, and in fact the word 'aspirin' is derived from the old Latin name for Meadowsweet, Spirea ulmaria (the Latin name for the plant has subsequently been changed to Ulmaria filipendula). Unlike aspirin, which is notoriously harsh on the stomach, Meadowsweet has a gentler action and so can be taken for headaches accompanied by upset stomach - the perfect hangover cure! Just yesterday, IB was suffering from a bad headache and I made him some Meadowsweet tea from fresh leaves and flowers which really helped. The flowers have a sweet, slightly almond-y fragrance with the merest hint of a medicinal undertone, and the chopped leaves smell fresh, a bit like a new-mown grass or hay, so it's a pleasant tea to drink. Of course, if you are allergic to aspirin or it's contraindicated for you it's best to err on the side of caution and avoid Meadowsweet too.

The flowers can also be used in the kitchen in many of the ways you'd use Elderflowers - to make cordial, champagne, flower fritters, to flavour beer and mead, or as an addition to fruit desserts and jams. Strangely they seem to come into flower just as the Elderflowers are fading, very helpfully extending the season.

In bygone days the dried herb was used as a strewing herb, scattered on the floors of houses along with other pleasant smelling herbs and rushes to make the home smell sweet and deter pests. It is said to have been one of the favourite strewing herbs of Queen Elizabeth I. I wonder if it might be nice to update this idea by using it in pot pourri?

Meadowsweet was one of the three most sacred herbs of the druids, along with Water Mint and Vervain. Perhaps that's why Math and Gwydion chose Meadowsweet as one of the herbs used to create Blodeuwedd (whose name means 'flower face') as a wife for Lleu, in the Mabinogion. 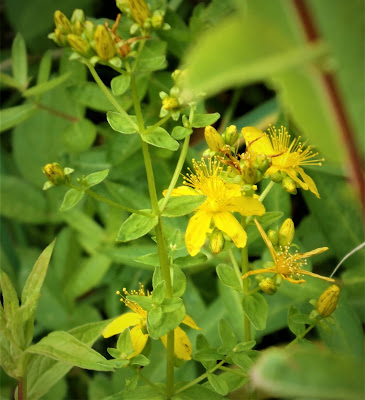 The other herb is sunny St John's Wort, probably the most solar plant I can think of (with the possible exception of Calendula and Sunflowers). The flowers even look like little yellow sunbursts, and its name is due to the fact that it generally begins to flower around St John's Day (24th June), a few days after the Summer Solstice. The small oval-shaped leaves are packed with little oil glands which secrete powerful healing compounds. If you're not sure if you've got the right plant, hold a leaf up to the light - you should be able to see what appear to be little translucent perforations on the leaf. These are the oil-secreting glands, and they give the plant its Latin name, Hypericum perforatum. And speaking of names, there are a number of plants in the Hypericum family which get called St John's Wort, potentially making things confusing - this is why knowing Latin names of plants can be so important! For the purposes of this blog post, I'm talking about Common or Perforate St John's Wort.

St John's Wort has become well-known in recent years as a herbal treatment for mild to moderate depression (studies show it's less effective for severe depression), and I find it interesting that this radiant little plant can literally chase away the dark clouds of depression and let the light back in for some people. I wonder if it's particularly useful for those suffering SAD (Seasonal Affective Disorder), which strikes in the dark days of winter?

Another strange sun-related connection: one of the possible side-effects of taking St John's Wort is photosensitivity, which means it can cause the skin and eyes to become more sensitive to sunlight thereby making some people susceptible to sunburn and eye damage. It can also have other side-effects such as gastrointestinal problems, dizziness and headache, and can disrupt the effects of some prescription drugs such as the contraceptive pill, anti-psychotics, and some cancer and heart medications. So check with  your GP or a qualified herbalist to make sure St John's Wort is suitable for you before taking it.

Although St John's Wort can make you more susceptible to sunburn, paradoxically an oil made from the plant is a great topical salve used for burns and wounds, to heal scars and to treat nerve pain such as sciatica. I made some last year by filling a sterilised glass jar with a tightly fitting lid, with the flowers and leaves and pouring over grapeseed oil. I left the jar on a sunny windowsill for a few weeks, and the oil gradually became a gorgeous deep red colour as the active ingredients infused into the carrier oil. If you would like to try this yourself, it's important to ensure the plant matter is fully covered by oil, as any that's left protruding above the surface will become mouldy and spoil the oil. When the oil has finished infusing, strain out the herb and store the tightly closed jar in a cool, dark place. As far as I know topical application of the oil doesn't increase photosensitivity, but to be on the safe side I don't use it on skin that will be exposed to sunlight.

In folklore, St John's Wort was seen as protective and hung above doorways and windows to protect the inhabitants of a house from evil spirits, or worn on the person as a charm.

It's raining right now, so I'll wait until the sun comes out again before going out to collect my herbs. As the weather is due to take a turn for the better in the next couple of days I will have plenty of chance to gather and dry my midsummer herbs. In the dark depths of winter I'm sure I'll be glad that I did!

Please also don't take any chances if you're not confident of your plant identification skills. Check with someone who really knows their stuff. And the golden rule is: if you can't be 100% certain you've got the right plant, walk away!

Posted by Moonroot at 4:06 pm No comments: 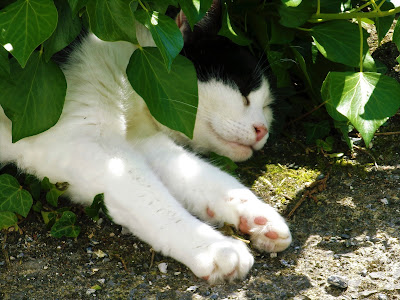 June in lockdown. Life here at Halfway Up A Hill is slow-paced, quietly satisfying as we work in the garden and enjoy the unaccustomed luxury of plenty of time together. Just us, the cats, the chickens, the earth and sky. As you can see from the picture above, Mandrake has been fully embracing the tranquility. 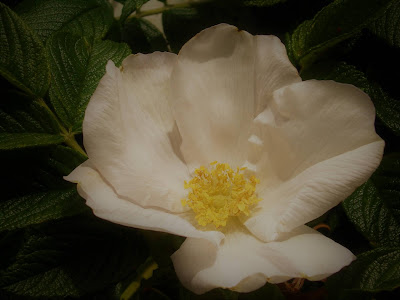 The garden is gloriously full of flowers, the air deliciously sweetened by roses and elderflowers, honeysuckle and meadowsweet. Everything is growing abundantly, nurtured by sun and rain. 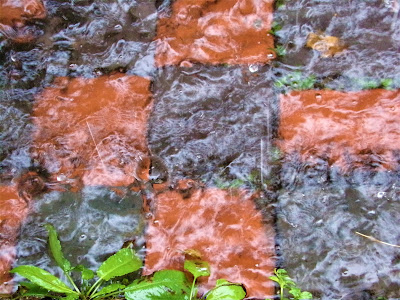 Ah yes, the rain... it has been very enthusiastic at times. But we have had plenty of warm sunshine too, so our crops in the vegetable patch are coming along beautifully. I'm pretty sure I can see them growing by the minute. 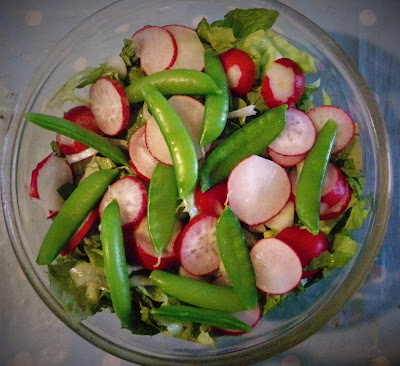 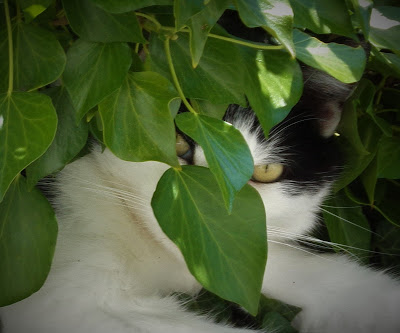 Mandrake reckons we're pretty lucky. I'd have to agree.