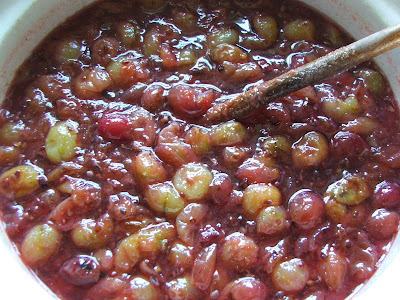 I first met Eva not long after moving to Wales. Within moments of meeting, she had signed me up as a volunteer at the Day Club for the elderly she ran in the village. She would have made a great army recruitment officer.
Small in stature (under 5 feet) yet huge in personality, Eva was a force to be reckoned with. Always immaculately turned out and with flawless coiffure and makeup, a lifetime of chainsmoking had left her with a deep, gravelly voice with which she belied her ladylike exterior by peppering her conversation with choice profanities. Blunt to the point of rudeness, never failing to call a spade a bloody spade, she prided herself on her fierce honesty and refusal to take any nonsense from anyone. Strong men quailed when confronted with her glare.
Yet she was also incredibly kind hearted, generous to a fault, hardworking and completely dedicated to both the Day Club and those she loved.
I was lucky that she took a shine to me straight away, and forgave any of my slip ups (such as the time I left a kettle boiling in the kitchen and got distracted, only to return twenty minutes later to find the room filled with dense steam) with a mild, "Well don't do it again!" rather than the strict dressing-down reserved for those who had truly offended her sensibilities.
About five years ago, Eva suffered a serious heart attack. The Day Club went into a kind of numb shock. Eva was the heart, soul and backbone of the club. No one had truly understood the extent of her dedication and sheer hard work until suddenly she wasn't around. After a few months of limping along without her, she returned, yet the heart attack had taken its toll on her health. She continued organising there for another year or so, yet it was clearly too much for her. Eventually, she skilfully manouevred me into replacing her as organiser of the Club, and (by now in her seventies) became one of the members instead of the chief worker.
However, it was hard for Eva to sit on the sidelines and watch, where once she led. For a while she didn't come to the club, preferring to stay at home alone. Any solicitous enquiries about her welfare or whether she was lonely were met with sharp rebuttals. "I have plenty of friends!" She would snap. "You don't have to patronise me!"
Happily, she eventually began to attend again, although I believe she never stopped seeing it as 'her' club. She certainly never hesitated to tell me what I was doing wrong or how I could do it better! But at the same time, our relationship deepened into mutual respect, and more than that, true friendship. Eva couldn't drive, so I'd take her shopping sometimes and together we'd happily trawl Carmarthenshire's plant nurseries, second hand shops and markets, or go to the local village fetes together. She would also advise me on how to live my life, sometimes quite hilariously. One of her choicest bits of wisdom, which made me laugh out loud, came earlier this year. She knew that T and I had split up, and when I said I was going on holiday to Spain with a (female) friend, Eva advised me "That's the spirit! Find a nice bloke, and enjoy yourself for a couple of hours." Awww, I thought. She wants me to find a holiday romance! But then she added, "Then tell him to p*** off!" which had me in stitches.
It turned out that I loved making jam and Eva loved eating it, so she'd save all her old jam jars for me and I'd send them back re-filled every time I made a new batch. One day when I went round, she'd found an old jelly bag and the stand for it which she no longer used, and gave them to me. Needless to say, her kindness was well-repaid in all flavours of jelly! I think of her every time I use it.
Eva particularly loved gooseberry jam, so I always kept her well-stocked. She declared the batch I made last summer the best she'd ever tasted, and having just completed this year's batch, I would love her opinion on how it compares. 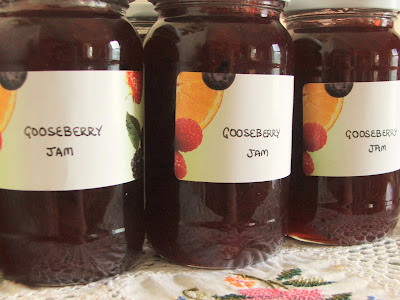 Sadly I can't get Eva's opinion. Sadly my dear, irreplaceable friend died, quite suddenly, in April. Sadly, I didn't realise just how much she meant to me until she was gone.
Eva was a true character, a one-off. Fierce, kind, uncompromising, funny. I will think of her and smile every time I make jam. Especially the gooseberry.
Posted by Moonroot at 6:51 pm 10 comments: My head said, "You can't eat strawberries and cream for breakfast!" as I searched the fridge for inspiration this morning. "Be sensible. You always eat something low fat, high fibre, low sugar for breakfast."
***
My head said, "You can't start a new relationship. You're just on the rebound. You aren't even properly divorced yet."
and few weeks later,
"You can't be in love. It's too soon. It's not safe. You're too old. It's too late."
***
I smiled.
Sometimes my head doesn't know the whole story. Or even the half of it.
But my heart does.
***
This morning I ate strawberries and cream for breakfast.
They were sweet and juicy and delicious, and my head had to admit that sometimes my heart knows best.
***
Posted by Moonroot at 8:04 pm 9 comments: