A Tale of Two Turnovers

Driving home from work today, I was ravenous, not having had time for lunch. On a whim, I stopped by the local shop. I had an insistent, out of the blue craving for a fresh cream apple turnover.

More than 25 years ago, I was backpacking around New Zealand. I had spent a few days in Rotorua, sightseeing the geysers and thermal pools. My trip - which had already taken me to Hong Kong, Malaysia and Australia - was nearing its end and money was becoming tight. Waiting for the bus to take me back towards Auckland, I hadn't eaten any breakfast and was starving. There was a bakery just by the bus stop, and through the window I glimpsed a tray of fresh cream apple turnovers. My stomach growled and my resolve to save money by not eating  until lunchtime crumbled. I bought one, and stood at the bus stop enjoying every glorious mouthful. It is amazing how much better food tastes when you are really, really hungry. It was just a simple pastry, but the memory of that turnover has stayed in my mind when memories of other, far grander meals have long since faded into oblivion.

I was musing on this today as I made my way to the chiller cabinet, where rows of eclairs, doughnuts and cream slices were displayed. And one - just one - fresh cream apple turnover. I had heard it calling my name!

I carried my prize back to the car. There, in the sunny car park, unembarrassed by the glances of other shoppers, I savoured every last bite. It's quite impossible to eat a fresh cream apple turnover without making a mess. Icing sugar powdering my nose, flakes of pastry on my shirt, sticky fingered, I licked my lips, enjoying it every bit as much as that other treat, long ago and far, far away. Different, but the same. Simple, but so, so delicious.

Sometimes the small pleasures in life achieve true greatness. This was just such an occasion.
Posted by Moonroot at 8:28 pm 3 comments: 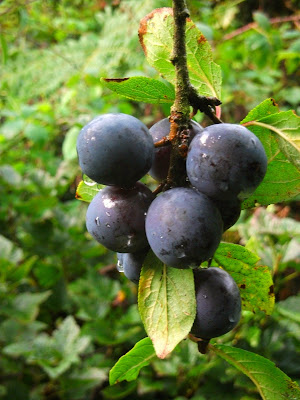 September and May are my favourite months. May, fresh and tender with new growth; September's maturely wistful, mellow air. The light in both months has a soft golden quality, the sun lower in the sky.
September is usually a last little burst of warmth before autumn sets in properly, the mornings chilly and  dewy, and the afternoons mild and golden. A 'season of mists and mellow fruitfulness'. This September however has been tempestuous and unsettled as the country is lashed by the tail-end of hurricanes from aross the Atlantic. Inbetween the storms the days have been as mild and sweet as usual, and the garden is full of abundant apples, damsons, autumn raspberries and blackberries. The hedges too are dripping with sloes, elder and hawthorn berries, rosehips and hazelnuts. The good weather in the early part of the year allowed excellent pollination rates and now we are reaping the results.

There is uneasiness in my heart though. Weather patterns seem to be changing, and although I know climate change and weather patterns are not the same thing, still there seems to be something going on. The last few years we have had bitingly cold winters, an unseasonably hot, dry spell in spring/early summer, followed by wet, windy summers and flood-prone autumns. Everywhere I hear people exclaiming about the unusual weather, not just here in the UK but all around the world. Droughts, floods, hurricanes, tornadoes, prematurely melting ice. Something is going on. And it disturbs me.

Here on the calm, mild days the sun is interspersed with gentle rain and it seems like a normal September. But in exposed places, traumatised trees have had still-green leaves torn away by the fierce winds. In the garden there are few signs of dew-dropped spider webs in the morning. All their careful weavings have been torn and battered down by storms.

The swallows have already left, and no doubt the martens will follow shortly. I pray they will find safe passage to their winter homes. Soon the winter flocks of starlings will be in evidence again. Hopefully this winter won't be so harsh for them.

I hope my fears are unfounded. But I worry about stormy times ahead. In the meantime I harvest fruit from garden and hedgerows, bottling, jamming, pickling, chutneying, drying and brewing it into store cupboard goodies for the cold months. What else can we do but prepare as well as we can for the lean times, whilst hoping for the best?
Posted by Moonroot at 5:38 pm 9 comments: