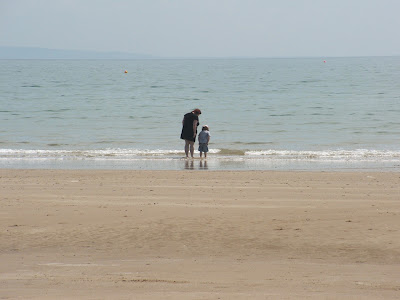 The sun is shining, the birds are singing, and I can even hear fledglings peeping in their hedgerow nests. It's Mother's Day and later I will be taking along a card and gift for my Mum and having lunch with her and Dad, which I'm really looking forward to.

This morning as I was lying in bed listening to the radio I heard a request for a song to be played for 'All those mothers who no longer have their children with them'. This of course applies to many situations - mothers whose children are being raised by someone else (children adopted, fostered, or being raised by their father for example) - but I think the person making the request was thinking more specifically of mothers whose children have died. One doesn't of course, stop being a mother or feeling the emotions of a mother just through separation or bereavement.

For the first time this morning though, I realised that I too fall into that category. I have mentioned here before my unfulfilled desire for children of my own, but what I haven't written about is that I did bear a child.

He was longed for and the pregnancy - after many years of trying - seemed like a prayer finally answered. Unfortunately, complications developed during the pregnancy and Peter was stillborn.

Losing a child at any age is unbearable, but losing a child before he is born puts you in a strange kind of limbo. Many people seemed to think it was kinder just to brush over the whole episode - "least said, soonest mended" - but in my experience I would say being able to talk about Peter, being allowed to hold him and spend time with him after the birth and then being able to give him a proper funeral was what gave me peace and closure.

The strange kind of limbo comes in the years afterwards. Do I count myself as a mother or not? What do I say when people ask if I have children? I usually just say no and leave it at that. It's mostly too complicated and painful to explain. But occasionally when I say I have no children I see the immediate assumptions being made. Oh, career came first. Oh, doesn't like children. Oh, chose to live the life of Reilly without the inconvenience of kids. That stings, even worse when it comes with the slightly judgemental, 'Oh, didn't you want a family?'

I suppose what I am trying to say this morning is that Motherhood - and Fatherhood for that matter - comes in many shapes and sizes. Women have children, have miscarriages, have stillbirths, have abortions. Children are adopted, fostered, raised by other family members; are abducted, run away, die. Shit happens, and we don't always have a choice in how things turn out. And that doesn't stop us being parents, or experiencing the love and pain that that involves.

So next time you ask someone if they have children, please don't make assumptions based on a 'yes' or 'no' answer. The story is almost always more complicated than that!

Happy Mother Day to ALL the mothers out there. Including me.

Well said indeed. I hope you have a relaxing and yummy lunch with your Mum and Dad...and celebrate Mother's Day.

your blog is lovely, i'll be back :)
Nicole

What a very good point, and I really felt for you with the 'didn't you want a family?' bit - people can be so judgmental, can't they?

It's also not so much fun when your mother is dead, looking at it from the other side, though having a daughter of my own - for whom I am profoundly grateful in many, many ways - goes some way to stopping the gap, I have found, but it still makes me wince slightly when I hear friends older than me moaning about having to buy their mother a card, or whatnot.

Here's to increased awareness that the obvious isn't always the full story. :)

Reading this deepens my love for you even more. You are one of my inspirations in life. May wonder and awe fill our lives full to overflowing.

Well, here in the states we have two months until Mother's Day. As Earthenwitch said, it's hard to celebrate when your mother is dead. I find myself crying every year.

People can be cruel. Sorry they make such insinuations to you. They just don't think before they speak. I've been blessed with two sons...now grown...but I remember the first time I took my eldest for a walk in his carriage. A lady stopped and ooh'd and ah'd then said, "Be careful. I just lost my grandson to crib death." I know she meant no harm, but do you know what that did to me? I became so paranoid and over-protective of this kid. I'd wake up many times a night just to make sure he as okay. I couldn't really enjoy his babyhood.
Mary

I hate when people assume that just because you dont have a child that you dont want them.

I've also found that having a child doesnt always mean you are a good mother.

I also think that some of us are mothers in our hearts whether the children we care for are ours by birth or not.

Happy Mother's Day to all of us. Celebrate your maternal sides and nuturing natures and enjoy them. :)

Oh, Susan. I say claim yourself as having had a child. You did. People can deal with the discomfort when you say Peter died. I honor you as a mother who has dealt with the hardest thing mother's have ever had to deal with - the lose of a child.

Thank you for honouring all the mothers who don't get recognised as such, including yourself. xx

just to let you know I have given you an award. If you check in to 'Songs from the Wood', all will be explained.

Beautifully written. Very moving and true. Also I love the photo of my own special little man at the beach.

Truly moved and touched. To write to eloquently and beautiful about something so deep and painful. An experience that so many have shared but is not openly spoken about. And therefore needs to be claimed and named. It is part of life. You are a mother.
And as you said it is not a simple or rarely straight forward response of either yes or no.
Thankyou with much respect, love and appreciation XXXXX

What a beautifully written post. Yo always write from the heart.

Yes people can be thoughtless. Life is completed, its not always simple or straight forward.

I don't have children but would love to have children, but can't see it happening any time soon. But like you I have found other outlets. I have wonderful nieces and I'm surrounding by my wonderful students every day, that I always feel the mothering instinct for.

sorry about my typing errors

I'm a tad bit too choked up to leave anything that would make sense. Thank you for writing this. I completely understand. Hopefully I'll see you soon and we can give each other a big hug.