Raining Cats and Dogs - And Chickens... 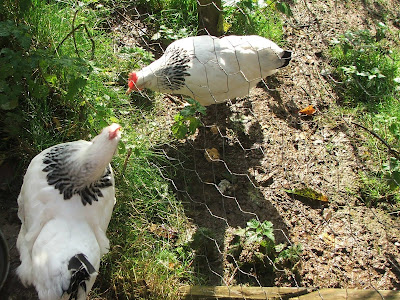 The stormy winds blew all night, throwing down sheets of rain. By morning they had subsided into intermittent gusts and showers, but when the chickens came out of their house a strange sight met their eyes. In the adjoining run were some new chickens - three more Light Sussex and a pair of Black Rocks, the sun highlighting the iridescent green sheen on their feathers.
"I don't like it, I don't like it at all!" complained Bella the Cream Legbar, who was by nature highly strung.
"I've heard the humans speak of it raining cats and dogs, but never chickens..." muttered Mac, an ex-battery hen and the thinker of the group.
Could it have rained chickens? It was a very rainy night.
The little flock looked expectantly at Blanche, the head chicken (and a Light Sussex to boot). She would know what had happened.
Blanche looked at their waiting faces, and puffed out her chest importantly. "If it can rain cats and dogs," she opined solemnly, "Then as chickens are the superior species it stands to reason that an unusually heavy downpour would produce chickens."
The others nodded in agreement. The logic was watertight, even Mac couldn't deny it. It would go down in poultry history. The night it rained chickens.