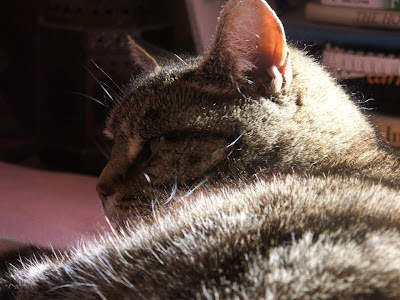 Tigger and her sister Teasel came into our life aged 6 in 1999, when a friend persuaded us to adopt them. They had belonged to her neighbour, a woman who was now terminally ill; her husband was her carer and struggled to cope with job, terminally ill wife, children, running the household and pet care. Something had to give, and as a result Tigger & Teasel ended up living in the garden with a rather intermitttent supply of food. My friend asked if we'd adopt them, and we did.
Tigger and Teasel were from the same litter, but as different as chalk and cheese. Tigger was very big for a female cat, strong, big-boned, sleek of fur and boldly striped. Teasel was small and fluffy with a delicate heart-shaped face and subtle dark mackerel-striped tabby fur. Tigger was a diva from nose to tail, highly strung, proud, regal, thoroughly convinced that she was the centre of the universe. I used to joke that she thought T and I were a pair of trained monkeys employed to wait on her. Teasel was sweet, affectionate and sociable. I nicknamed Tigger my Princess and Teasel my Angel.
Unfortunately, Tigger and Teasel never got on. Perhaps because they'd had to compete for food during their life as outside cats, or perhaps they were just too different. But somehow we all learned to work round each other and when we moved to Wales in 2000 they came with us to a new life in the country.
Teasel adapted to the countryside well, and became an expert hunter, once even struggling back home with a rabbit bigger than herself (which I rescued and freed, much to her disgust). Tigger enjoyed a life of aristocratic snoozing in sunny patches under the hedge. Both were spoiled rotten by T and I.
In 2004 we added two kittens to the household, Bear and Marley. Teasel acted like a slightly impatient aunt and taught them hunting skills, and Bear in particular followed her around with a look of hero-worship. Tigger on the other hand treated them with utter disdain and was quick to quash any kitten nonsense with a swipe of the paw should they dare to approach her royal personage. They soon learned to stay out of reach, although Marley could never resist attacking a sleeping Tigger's tail.
We were all heartbroken the following year when it was discovered that Teasel had an inoperable tumour in her stomach and had to be put down.
Down to three cats, a clear class system evolved. Tigger was the Princess, the grand old lady who expected total respect and obedience. Bear and Marley grudgingly showed deference, giving grumpy Tig a wide berth.
Despite her diva-like demeanour, Tigger was always very affectionate to us and liked nothing better than to snuggle on a cosy lap. She especially adored T, who adored her back. When she developed health problems a couple of years ago and had to be given a tablet twice daily, she proved to be surprisingly good about taking the medication. Gradually as the years passed she slowed down, but still enjoyed cuddles, time in the garden every day and a healthy appetite. 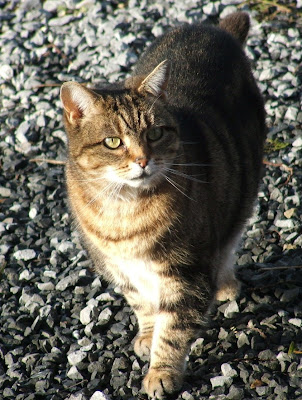 Last Monday, after a normal start to the day (jumping up on the bed for a cuddle when the alarm went off, breakfast, walk in the garden) she suddenly developed breathing problems. By the time I got her to the vet she had deteriorated quite quickly. The vet tried injections and putting her in an oxygen tent, but it was no use. There was no improvement and when she became distressed by the inability to breathe the decision was made to put her down.
T came down after work on Tuesday and with many tears from both of us, we buried her in one of her favourite sunny spots under the hedge.
I am glad in a way that it happened quickly, with minimal suffering. But now it seems there is a piece missing. I mentally count one, two, three - no, only two cats now. Even though much of her time of late was spent sleeping, I feel the lack of her presence. Such a big personality leaves a big empty space when it goes.
RIP Tigger - survivor, Princess, big stripy purring machine, friend.
Posted by Moonroot at 10:49 am 24 comments:

I used to know who I was.


I was the girl who was going to be a writer.
The curious girl, who sang to the moon,
Believed that love conquered all,
And laughed out loud with her heart on her sleeve.


I forgot who I was.

Somewhere I lost my bearings,
Confused by the girl I saw reflected in your eyes.
I thought she was me.
She was not.


And now, the reflection shattered,
Illusion fades.
The ground shifts beneath my feet - who am I?


I am the woman who writes.
The curious woman, who sings to the moon,
Believes that love conquers all,
And laughs out loud with her heart on her sleeve. 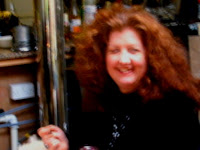 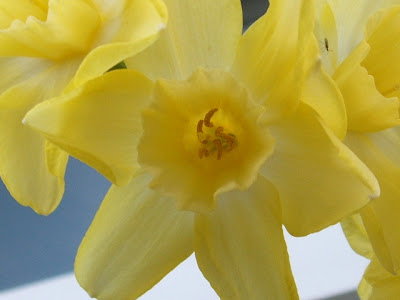 Just in the nick of time for Saint David's Day, a handful of daffodils have opened in the garden this morning. The cold winter we've had has set many plants back - for example the snowdrops at Halfway Up A Hill are only now really in full swing. Yet this morning is bright and sunny and full of birdsong; the first few daffodils are shining brightly and little purple clusters of crocuses I had forgotten planting are peeping up through the grass. I can hear lambs bleating on the hills, and extravagant tassels of hazel catkins dance in the hedge with the slightest breeze.