This is a little off topic - but I hope you'll forgive me! It's a video written, directed by and starring my multi-talented brother who works full-time as a Henry VIII re-enactor, mostly teaching Tudor history to schoolchildren.

I think the video is hilarious - hope you like it too.

The 'C' Word, Part 1: Back Story and Birthday 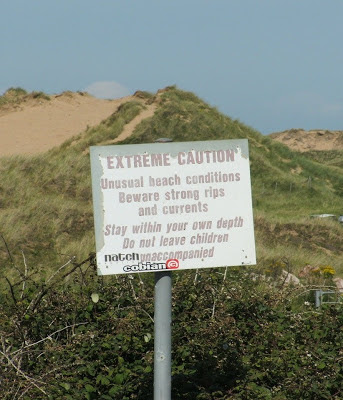 Well that got your attention didn't it?

Actually the 'C' word we're looking at here is closure. Or rather Closure. This summer Closure has been writ large in my life, so much so that I wonder if there's some huge astrological maelstrom going on in my birthchart, or perhaps my guardian angels have been putting in overtime. Lots of it.

Most of the time life proceeds in a normal, haphazard fashion - a bit of this, a little of that, a few highs, a few lows. But once in a while, it is as if a hidden riptide suddenly grabs us and carries us in a certain direction. There is no choice but to go with the current, attempt to keep your head above water - if only to get a clear enough view to try and get your bearings - and wonder what the hell is going on? That has been my summer this year. So many turning points, realisations and loose ends getting tied up. One after another, bam, bam, bam, with barely enough time to breathe before the next wave breaks over my head. It hasn't been bad, in fact much of it has been pretty good. But such a strong sweeping along in the grip of - what? Fate? Karma? - can't help but stir up a whole lot of stuff from the depths of the Unconscious, so there have been moments when I've felt overwhelmed. But whew... what a ride.

So where to begin telling this tale? Perhaps some backstory is needed. If you've read this blog for any length of time you will know that I was blindsided by the end of my marriage five years ago (yes, five years! I can't believe it's been that long. If you want to catch up on the gory details, you could look back at posts labelled 'T' or 'divorce'). And the year before that, the cancellation of Avalon Witchcamp and the fallout amongst my spiritual community followed by the stress of organising a Summer Gathering as a replacement event was a source of great stress at the time and on-going repercussions subsequently (gory details for this labelled 'Avalon Spring/Witchcamp' and 'Summer Gathering'). And so in recent years this blog has been as much about putting my life back together and struggling my way through a period of readjustment and starting over as Paganism, Permaculture and Poultrykeeping!

Anyway, when I last posted I had just torn a ligament in my shoulder. It was a huge pain literally and metaphorically, as not only did I have to take time off work I could ill-afford, but also we were in the middle of decorating the spare bedroom and ripping out and re-fitting the bathroom. Being incapacitated was made even more annoying by the fact we had a deadline to meet - the bedroom and bathroom needed to be finished and the house and garden given a serious clean, tidy and facelift by mid-July as I was about to have my 50th birthday and had planned a big party. Injuring my shoulder couldn't have come at a worse time!

In the end, the spare bedroom was finished and the bathroom all but completed in time for the party. We managed to get the rest of the house looking as good as possible, but something had to give and the garden had to be left somewhat wild and unkempt. Personally I quite like an overgrown garden, but I had rather hoped to give it a bit of a spruce up before the big day! Even without getting the garden sorted, we'd still worked flat out for six weeks excepting the week my shoulder was completely unusable. So by the end of the week leading up to the party I was pretty exhausted.

My birthday fell on a Saturday, and Mum and Dad had invited IB and I, plus IB's Mum, Sheila (visiting for the party) over for dinner the night before. I knew my brother, sister and brother-in-law would all be there too and was looking forward to seeing my family and not having to cook! Unfortunately, Sheila's bus was quite badly delayed and we were an hour and a half late in the end.

When we finally got there, we were greeted with hugs and kisses from my family, drinks were pressed into our hands and we were ushered into the garden where I was delighted and surprised to see my cousin George, his wife Alex, my aunt Anne... and then suddenly a laughing, exuberant crowd of familiar faces erupted from around the side of the house. A surprise birthday party for me - and I was late! 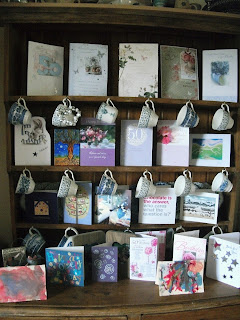 Some of my birthday cards

It was a wonderful evening! I was amazed that everyone had gone to so much trouble to surprise me and it was so good to spend time with friends and family I rarely get to see. I was spoiled rotten with hugs, gifts, champagne and an amazing spread of food including a beautiful cake made and decorated by an old schoolfriend. 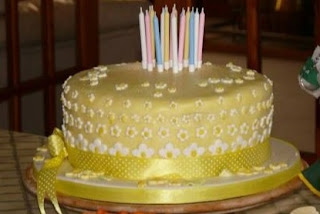 The official party the next day was an all-day casual 'open house' from midday onwards so that people could drop in when it suited them and stay as long as they liked. It was a beautiful sunny day, absolutely scorching in fact - so most of the guests opted to sit out in the garden, wilderness though it was. Throughout the day friends, neighbours and family arrived with delicious contributions towards the pot-luck style buffet, and I was also given many wonderful gifts, despite having told everyone not to bother with birthday presents! 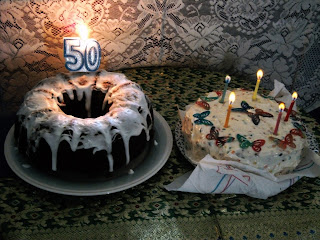 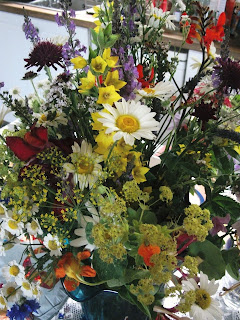 Beautiful bouquet of flowers from Fiona and Philip 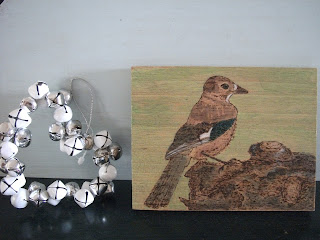 
The party was quite hectic, with people coming and going throughout the day, and as always with these things there wasn't enough time to spend much of it with anyone! But by the time the heat of the day cooled into evening, we sat in a companionable group outside, drinking, re-telling old tales and sharing new ones, teasing, laughing... a memorable end to my birthday festivities.

So that was the beginning of my 'Summer of Closure' - the end of my forties. More soon...

Back Soon! In the Meantme... 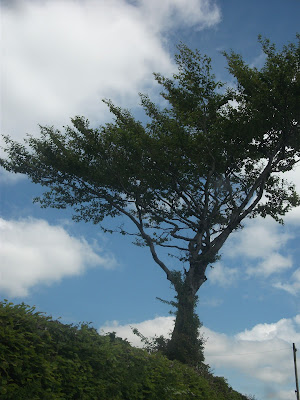 Just popping in to say that this has been a memorable summer with lots of Big Stuff happening - and I'm finally getting around to writing about it. So either one mega-post or several short ones will be appearing soon. In the meantime, a little reminder that I have been writing a column for the online 'Pagan Pages' e-zine. My current column (The Tree of Life) can be found here, and previous columns are in the archives (or there are links at the bottom of the current Tree of Life post).