Yes, after months of planning it was finally time for Avalon Spring. On 4th April I packed the car and set off, picking up my friend and fellow facilitator, Gaia, en route.

We gathered at Alessandra's house in Hemel Hempstead along with the other teacher-facilitators and worked hard planning the evening rituals and honing our 'Paths' (classes) with our teaching partners. I say 'worked hard' - and we certainly put in the hours - but the group was friendly and harmonious and we had so much fun that it scarcely seemed like work at all.

Then on Sunday morning, the day we were due to move to the venue, we awoke to this: 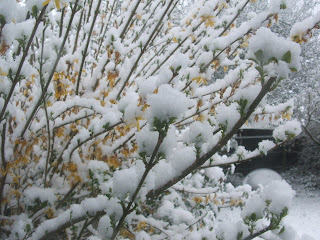 
The weather had changed from mild and sunny to winter overnight and we awoke to a heavy fall of snow. I have known it to snow in April before, but I don't recall it really settling - and certainly not in such abundance!

The mood in the house changed to one of mild hysteria. Not only did we have about 8 people planning to camp for the duration of the event, but we had also planned to hold many of the classes outside to compensate for the rather restricted indoor space available. Clearly, this was a serious problem!

Our worries were compounded when Brighde Eire's car broke down. We had a large amount of equipment and luggage to move as well as people. With one car down we were seriously short on transport. We agreed to meet at a café and discuss things over coffee. And while driving over to the café disaster number three manifested: the exhaust pipe of my car broke and was dragging under the car.

As witches we are accustomed to looking for meanings, signs, omens, cosmic messages in such things. Could someone or something be trying to tell us something? We were starting to feel jittery!

Over coffee we came up with solutions. The lack of indoor Path space - and the impracticality of utilising outdoor space due to the snow - could be solved by cutting down from four separate paths to two by combining the 'Air', 'Fire' and 'Water' Paths into one. We kept the 'Earth' Path unchanged as it would be producing the food we'd be eating. For the campers - well, we had warned them to bring plenty of cold weather gear due to the uncertainty of the April climate, and as the snow had chosen to fall the day before camp started hopefully they would be fore-warned. One of my fellow facilitators, Sayre, managed to hook up my exhaust pipe with the aid of a wire coat hanger so that at least it wasn't dragging under the car, although it still growled ferociously. And the lack of car space was solved by packing all of the luggage and equipment into the available cars, and putting most of the facilitators on the train.

Arriving at the venue we were all taken aback by what we found. It was smaller than we had expected. And spartan. The kitchen (which the Earth Path would be using) was actually a barely screened-off part of the main living area - which the combined Air-Fire-Water Path would be using. How would we cope with noise levels and conflicting needs? Clearly this camp - which we had been describing as a 'new model' was throwing up a lot of new challenges. But we were determined to rise to those challenges.

We decorated the bare walls with saris and hangings. We created elemental altars in the four directions, plus an 'emotions' altar and a camp altar for campers to add to. Gaia had brought along three of her amazing Goddess paintings which made great focal points. Alessandra had brought fairy lights which we strung around the room. We used more draping cloth as additional screening for the kitchen area. Things started to look better. Fran had brought along a huge tent which Naomi transformed with rugs, cushions, draped fabrics and a 'Brigid' altar into a relaxing sanctuary for anyone who might feel overwhelmed by the cramped living conditions. The Air, Fire and Water Paths turned out to combine amazingly harmoniously as it transpired we'd all been planning a similar 'arc' to our work. The Combined Path and Earth Path planned together to minimise disruption. Perhaps it would work after all!

We were anxious about how people would feel with only a choice of two paths, after we had advertised four. But when everyone had arrived we held a meeting to explain why we had made the changes and everyone was very understanding and supportive. And so the grand experiment began in earnest. 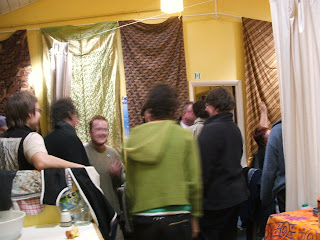 
So, looking back, how did it go? Amazingly well actually. So much for portents of doom! By the end of the week everyone seemed to have enjoyed themselves - some of course more than others - and got something from the experience. For myself, these are some of my personal highlights and favourite memories I shall be taking away: my role as fire tender during the first night's ritual which put me deep in trance and led to a new relationship with that element; watching the sharpest sliver of a new moon growing nightly in the sky; the magnificent job done by the Earth Path in not only feeding us, but also helping us experience our food in a sacred, mindful, magical way; the blackbird who sang to us so beautifully every morning; the joyous hilarity of the last night's ritual in which dancers in the two concentric circles moving around the fire began anarchically swapping places so that everyone could experience both the dark and the light; the way the Combined Path took the best bits of its three original components and re-wove them so seamlessly into something new and dynamic; the sun coming back out after we did some weather magic; the enthusiasm with which the campers rose to the challenge of creating their own 'Community Ritual'; Fran's beautiful poem read to us over dinner; the chance to discuss how 'Introvert' and 'Priestess' are not incompatible concepts (thanks, Dawn!); Chris's song; the open-hearted generosity shown by people supporting the raffle and auction; my dear friends Annie & Georgia adding to my bids at the auction for the necklace I had fallen in love with to help me win it (I really am blessed to have such good friends!); forget-me-nots and violets in the grass; meeting with old, dear friends and making new ones. 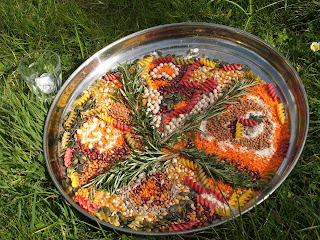 Community-created food mandala, which was left out as an offering to the local wildlife.


It is amazing how 32 adults living together in very cramped conditions for five days can manage to co-exist compatibly. We all had different expectations, outlooks and needs; yet somehow we worked around and with each other. Someone described the situation as a 'microcosm of the macrocosm' - after all, planet Earth is a crowded place where we all have to try and live in community - and I find it very heartening that our microcosm worked so well. Blessed Be. 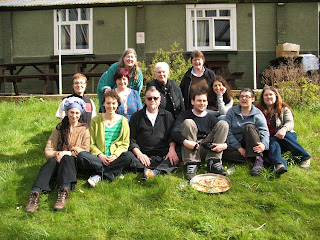 My fellow facilitators and dear friends (Thank you all for a wonderful and memorable week. Love you and miss you all!):
[back row L-R] Sayre, Georgia Midnight Crow (seated), Suzanne Swan (standing), Deborah Oak, Annie, Dawn Isadora
[front row L-R] Gaia, Fran, Donald, Will, Alessandra Proserpina, Brighde Eire.
Naomi isn't in the photo as she was busy giving a lift to someone.

P.S. Deborah Oak's account of our magical time together may be found here, and Donald's (in several instalments) starts here.
Posted by Moonroot at 2:06 pm

I am so pleased you had a good time. It was good to see you as well!

It seemed like you all really enjoyed yourselves and I am so pleased for you all that it all turned out alright in the end after all the initial instances that were set to try you.

I'm glad it went well - even if there were a few serious hiccups along the way!

Well done for overcoming so many obstacles by adapting - I suppose that's what it is all about, isn't it.

thanks susan! you reminded me of a few bits I'd forgotten! Like the broken exhaust pipe. And it was amazing how well all of us adapted...and how kind people strove to be! And succeeded in being. oh...I got you a goddess of the geese at a charity shop in chesham...anne marie has it and it will come to you eventually.