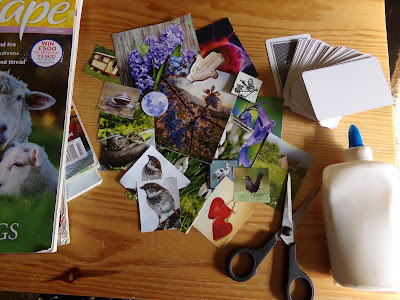 I've been thinking for a while about creating my own Oracle Cards. I've made oracle sets before, mostly runestones from painted pebbles or air-drying clay - some using the standard Elder Futhark runes and others with my own invented symbols etched into them. Last autumn I taught a workshop during which the participants made their own divination sets. Most people opted to make oracle cards and I've been itching to make my own set ever since. The lockdown means I have time on my hands, so I've finally started. 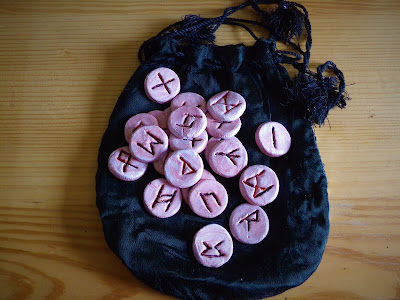 
I found some blank playing/tarot cards (to decorate yourself) cheaply online - but you could also use craft card or re-use packaging card/cereal boxes, or old birthday or Christmas cards cut to size (if you re-cycle card, you may like to cover the backs with wrapping paper or something similar so they are uniform).The blank cards come in a pack of 100, which is way more than I'm intending to make, but the extras mean I can afford to experiment and make mistakes. Unlike a Tarot deck which has a standard number of cards (78), oracle decks can have as few or as many cards as you like. I imagine I will start with a certain number of cards but probably add to them over time as new images suggest themselves.

My first step was to give much thought to what my symbols would be. I already had a good idea of my own personal symbolic language, so I started a list which I added to as more symbols occurred to me. I believe the meaning of symbols is a very personal thing, and as I wrote in The Clean-Start Soap Spell the accepted symbolic meaning of something may be completely different to what it means to you (I gave the example that Frankincense may mean 'higher spiritual connection' to one person, but to someone with an oppressive religious upbringing it may speak more of repression, guilt or fear). Symbols are how our subconscious communicates with us, and will be as individual as our experiences and memories. So while books which claim to interpret dream imagery or symbols may be a useful jumping-off point, it is always more important to trust your own instincts and feelings about what things mean. Once you do, it makes understanding messages from the subconscious (dreams, images from guided meditation or trancework etc) much easier! 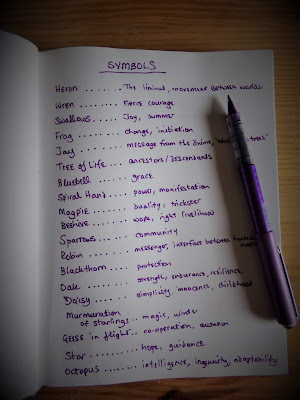 For example, in my own personal language of symbols swallows mean joy (and summer). A hand with a spiral on the palm represents power and manifestation. A frog means change and/or initiation. And so on. My symbols are mostly nature-based, drawn largely from observing and interacting with the land around my home, but your own personal language of symbols may be inspired by very different experiences and imagery. Go with what your subconscious knows and understands. You could even use characters, images and events from the canon of a well-loved fictitious world - Hogwarts, Middle Earth, Sunnydale?

I initially intended to draw/paint the images on my cards but ultimately (mostly through lack of trust in my artistic ability!) decided to collage the cards, with some added hand-drawn decoration where appropriate. I had an idea in my head for what I would like for most of the cards, and also did a few preliminary sketches, which helped get the creative juices flowing.

With an idea of the cards I would be creating, I started to look through old magazines to find suitable pictures. This was instructive as I found not only symbols I'd already listed but also some that spoke to me which hadn't been included on my original list - so that got longer. The images I found also helped me refine or revise the design of each card. For example I'd originally envisioned a 'Tree of Life' to symbolise Ancestors and Descendants, but having found a wonderful photo of an old hand holding beautiful ripe apples I immediately revised my ideas for the card (apple trees in my own personal symbolic language being inextricably tied up with my grandparents and my childhood). I then found a beautiful black and white photo of an old, wrinkled hand holding that of a child, and together the two images sum up the meaning of the card perfectly for me.


Then - gulp - it was time to bite the bullet and begin putting the cards together. Having cut out the images I intended to use, I laid them out on the cards before sticking them down to check that they'd look as I expected them to. This enabled me to change the composition around, and in some cases I found the pictures didn't gel together the way I'd hoped, so had to find new images or re-design a few cards. Once I was happy with the way they looked, I stuck them onto the card with PVA glue, and trimmed the edges where needed. Using permanent fine-liner marker pens, I added symbols to some of the cards.

I found the cards had a tendency to curl up slightly after being collaged because of the glue, but this was easily remedied by pressing them under a heavy book once the glue was dry.

I think this is going to be a continually developing Oracle set, as new symbols occur to me or I find suitable images to use. It may be that I have to draw/paint some cards if I can't find the right pictures to collage. But I'm very happy with how they're turning out so far. 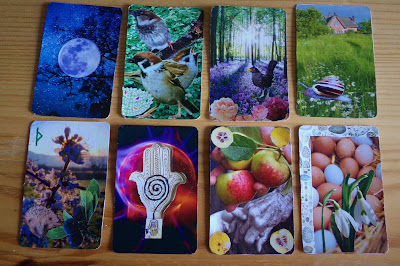 Here are a few of the finished cards.

Top Row, L-R:
Bottom Row, L-R:
Let me know how your cards turn out if you decide to make some!

I shall have to try making my own tarot and rune cards. Brilliant idea!